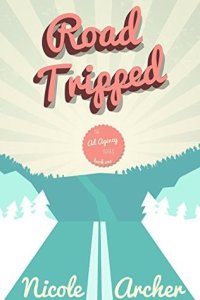 What’s worse than losing everything? Try driving a phallic-shaped RV across the country with a vile womanizing coworker.

Copywriter Callie Murphy has a bad attitude, a vicious tongue, and a serious aversion to Shimura Advertising’s resident manwhore, Walker Rhodes. Know where he can stick his good looks and Southern charm? She can think of a few creative places. Avoiding him wouldn’t be a problem, except her boss threatens to fire her if she doesn’t go along with him on their RV client’s cross-country tour.

Burnt-out art director, Walker, is sick of his job, tired of women, and in a big old creative rut. The upcoming client road trip is just what he needs to shake things up and rediscover his lost passion. But his plans go south when his partner drops out at the last minute, and Callie, the foul-mouthed tiny terror, takes her place. Unless he can find a way to thaw his icy coworker, he’s looking at two months of pure hell.

On the road, they experience one hilarious misadventure after another and soon find themselves on a life-changing journey. But when their paths veer off in different directions, will they hit a dead end?

Road-Tripped is a stand-alone novel and the first book in the Ad Agency Series.
Adult language and situations.

I love romantic comedies. I may not watch the movies as much but I love them in books! I think when done well they have just the right amount of angst to help the reader root for the couple and their happily ever after you’ve already invested in them because they fit.

Road-Tripped gave me more angst than I expected, but as a whole I think this was full of heart, and has a healthy dose of comedy as well in the form of Callie and Walker bickering while on the road.

Road-Tripped follows Callie Murphy and Walker Rhodes, employees in an ad agency down on its luck, on a road trip that could change the fate of the whole company. The thing is, they don’t like each other (don’t they always) – Callie thinks Walker sows his oats far too widely, and Walker doesn’t relish spending time with a scowling, frigid lady who obviously doesn’t like him. They need to do it though, or they’re both fired. Stuck in an Airstream for over three months while documenting their road trip, Callie and Walker will have to find a way to get along or the entire project could go bust.

I think Road-Tripped just reinforced my want for a photographer boyfriend. I want artistically shot candid moments as well!! Callie, I have to admit, frustrated me at times because the girl does not open up easily, but Walker was half of the couple so he has a hand in this as well. Their misunderstandings could’ve been cleared right up if they actually talked to each other, but for some reason they don’t.

Some elements of this are familiar (hello, forced cohabitation! You are undoubtedly one of my favorite tropes ever) so this is predictable in some parts, but this has lots of heart, thanks to Callie and Walker. Honestly I felt like the ad campaign took a back seat to everything else, since there are only a handful of times I read about them actually working on the campaign, but it’s just an observation.

What I liked best about Road-Tripped is that it follows Callie and Walker’s growth, and I like to think they helped each other out of their respective “downs.” Like they found their footing together, and though they did stumble a lot they were together in the end and always sought each other ought after their fights, which is what we’re here for. I like how Callie and Walker gradually got to know each other and become friends, and as the book goes along they become each other’s cheerleader and inspire each other to do their best.

I will say though, that Callie jumped to conclusions too quickly, and while understandable, I was kind of disappointed that Walker walked away quite a few times. For me I guess I’d like the guy to be a bit more stubborn, like dig in their heels a bit, but honestly sometimes it really is easier to walk away and let things cool down a bit.

The romance starts out fairly typically – they hate each other’s guts, and the enforced closeness forces them to bond. But what sets this apart, I think, is that Callie and Walker have fairly unconventional backstories – which is why I think this is character-driven. The backstories and how they shape what happens in the book are what makes this different other romantic comedies, since I haven’t read any books categorized as rom-com that have such heavy themes.

Seriously though, what frustrated me was that the problems Callie and Walker had could’ve been easily solved by talking. If there is one thing I think everyone can take away from reading/watching romantic comedies is that communication is key. Save yourself the heartache and converse with each other.

Overall this was quite the ride! Exhausting emotionally sometimes, but I could not put this down. What is work? What are deadlines? I read this in a day and I can say I have no regrets. Nicole Archer still manages to inject a healthy amount of humor in the book despite the heavy themes, which I appreciate. You’ll like this if you like contemporary romance (think Meg Cabot, Sophie Kinsella), and if you like satisfying epilogues, this one will do!

3.5 stars! While overall I like the story, some problems Callie and Walker encountered could’ve been solved by simple communication, or just dropping their prejudices against each other, so that detracted from my enjoyment a bit. But still a good debut for Miss Archer!

Plot/Story: ✮✮✮☆☆
Starts out fairly typical and follows a tried and true formula for rom-com but still very enjoyable.

Romance: ✮✮✮✮☆
Maaaybe a 4, but overall I live for Walker’s kind of boyfriend: takes candid, well-shot, well-lit photos and you turn out great every time. What is not to like????

For more information about Nicole Archer and her books, visit her website.

One thought on “Review | Road-Tripped by Nicole Archer”

Welcome to my little home on the web! I'm Nina - 20-something, bookish, and a Ravenclaw. By Page or By Plane was started when I wanted to expand beyond writing reviews on Goodreads, and it's been pretty fun so far! .*:･ﾟ✧
Follow By Page or By Plane on WordPress.com